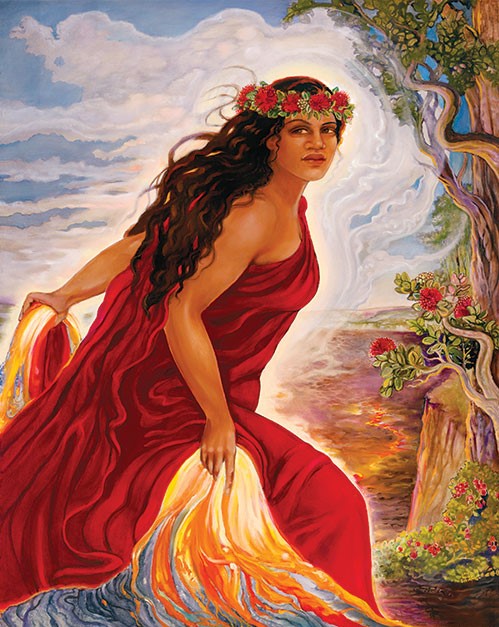 Forty days had been the time given from Pele to her sister Hi‘iaka to traverse from Kīlauea on Hawai‘i Island to the island of Kaua‘i to retrieve her lover and husband Lohi‘au. Pele had promised to watch over Hi‘iaka’s companion Hōpoe and beloved lehua forests in order for her sister to move with more haste. A small voice, perhaps a basic more human need, paused Hi‘iaka – she requested a travel mate for her journey.

“Your request is reasonable,” said Pele. “To travel alone is indeed to converse with one’s shadow. You shall have a companion.” Pele designated a good-natured waiting woman by the name of Pāʻūopalaʻe who quickly took her post as Hi‘iaka’s servant and pseudo guardian. 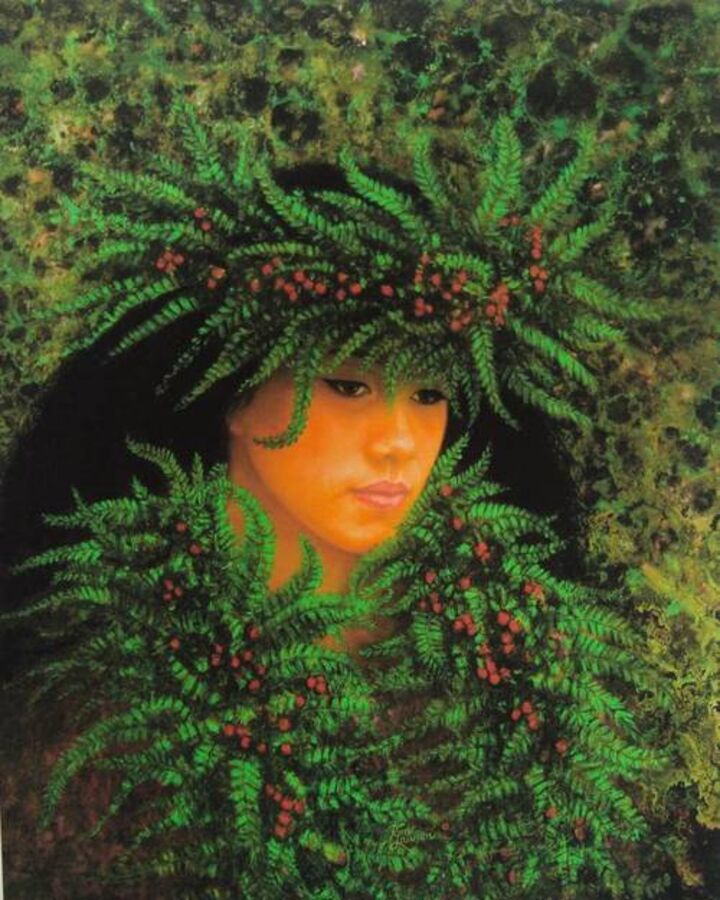 And with that, Pele said to her sister, “Go on your journey. Nothing shall avail to block your road. Yours is the power of woman; the power of man is nothing to that.”

As Hi‘iaka and Pāʻūopalaʻe made their way past the steaming vents of Kīlauea nearing Pana‘ewa, they happened to come across a young woman. “O, Pele,” she said, “I am Wahineomaʻo. Please accept my offering.” 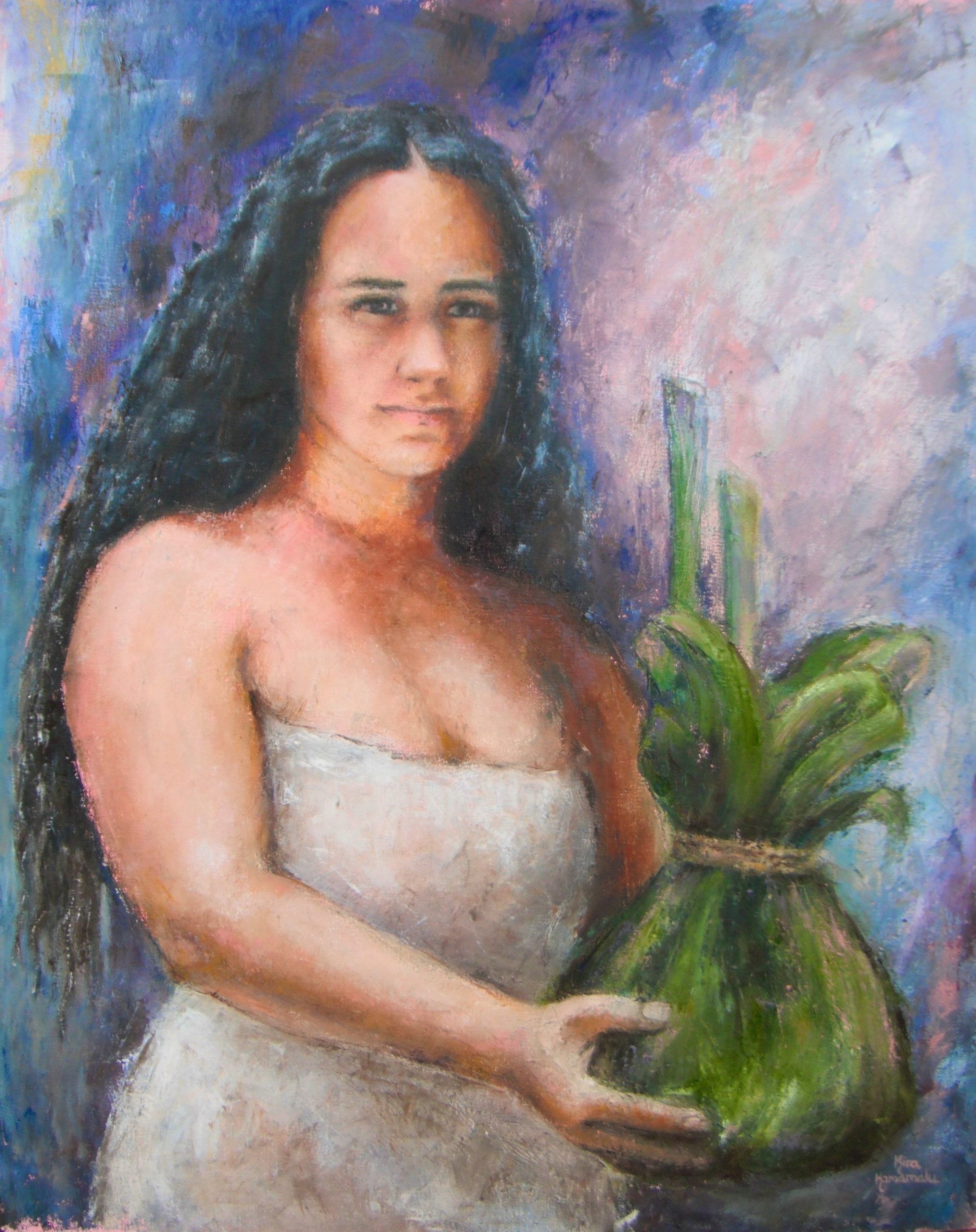 “I am not the one you seek. I am not Pele,” said Hi‘iaka. “The one you seek is further still in the pit of Kīlauea. Be careful when you approach as without the utmost etiquette, it will surely mean your death. Pay attention only to the wrinkled old woman lying bundled up on the hearth – that is Pele. Make the offering to no one else but to her.” Hi‘iaka, using her powers, sent Wahineomaʻo at once to her destination. 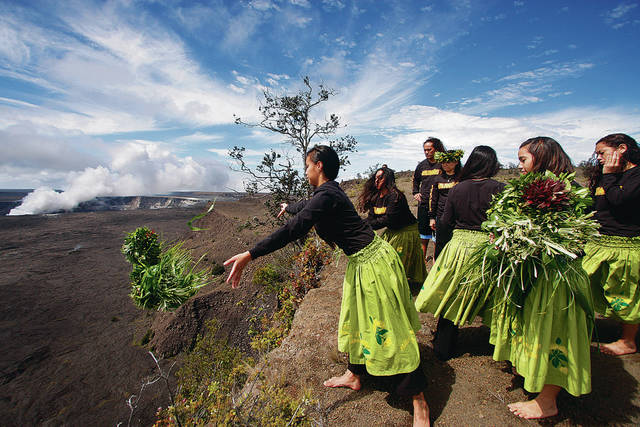 Making her offering, Wahineomaʻo began to leave when Pele called back to her and asked if she met two women traveling away from Kīlauea. After acknowledging Wahineomaʻo had, Pele ushered her to move with haste. “The younger woman is very dear to me. Attach yourself to her as a friend,” Pele instructed. Wahineomaʻo took her departure and almost immediately found herself with Hi‘iaka whom she would now journey with.

As they continued their journey, the trio came across a group of girls busily picking flowers and making lei. The group of girls were captivated by Hi‘iaka’s glow. The most vivacious of the party, Papulehu, a buxom young woman from an important family, claimed Hi‘iaka as her friend and quickly announced a great feast in her honor. During the feast, Pāʻūopalaʻe, at the request of Hi‘iaka bade all that attended to lower their heads and shut their eyes. With this, Hi‘iaka called upon the elements and the gods to feast and partake. The food in front of her vanished, evaporated as a drop of water does in the heat of the sun.

Hi‘iaka resumed her journey, taking with her Papulehu in addition to her other companions. Upon their way they met a group of men pulling in a net of fish. Papulehu hungered and Hi‘iaka coerced the men to provide them with some fish. Papulehu cooked and ate the fish with very little refinement and did not dispose of the unconsumed parts properly, which were to be burned or buried. Instead, she discarded them laying about on the ground. This act was quite insulting to the gods, and highly offensive to Pele.

Two routes presented themselves. One ordinarily taken by travelers though long and circuitous and the second more direct route but less desirable due to dangers which may present themselves. Hi‘iaka selected the direct route as time had been against her having only forty days in which to retrieve Lohi‘au from the island of Kaua‘i. They continued against the lamentations of Papulehu into unknown dangers that may befall them.

Join us next month to learn of the dangers that await Hi‘iaka and her companions.